An Aneurysmal Bone Cyst (ABC) is a benign cystic lesion of bone, composed of blood-filled spaces separated by connective tissue septa (walls) containing fibroblasts, osteoclast-type giant cells and reactive woven bone. It is found more frequently in the mandible (lower jaw) than the maxilla (upper jaw) (3:1) with preponderance for the body, ramus and angle of the mandible. It affects young persons under 20 years of age with no gender predilection. 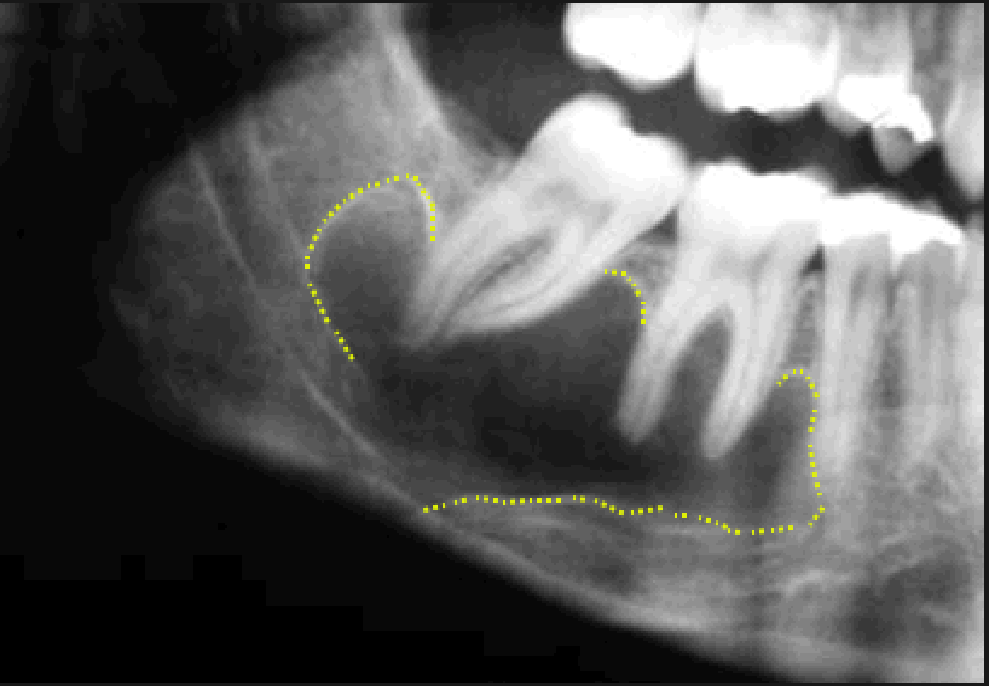 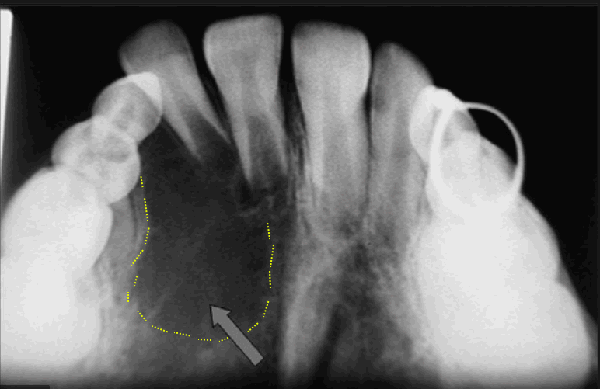 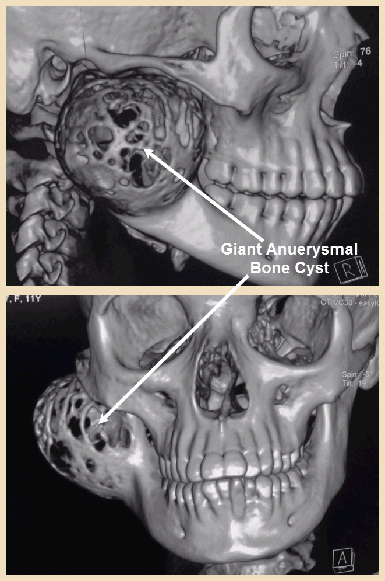 What are Aneurysmal Bone Cysts?

The Aneurysmal Bone Cyst (ABC) of the jaw is a pseudo-cystic lesion lacking an epithelial lining. It is a rapidly growing and destructive bone lesion characterized by replacement of the normal bone with fibro-osseous tissue containing blood-filled sinusoidal / cavernous spaces. Although the ABC is a benign lesion, it can behave locally in an aggressive manner locally because of its rapid growth & osteolytic capacity. This lesion represents less than 1% of all the bone cysts biopsied.

It is most common in those regions of the skeleton where there is both a relatively high venous and marrow content. This explains the rarity of ABC’s in the skull bones, in which there is low venous pressure.

The radiological features of ABC’s in the jaws are quite varied.

The bone is expanded, appears cystic resembling a honeycomb / soap bubble & is eccentrically ballooned. There may be destruction / perforation of the cortex and a peri-osteal reaction may be evident.

It may appear radio-lucent, radio-opaque or mixed.

What are the signs & symptoms of an Aneurysmal Bone Cyst?

ABC’s can be classified into 3 types.

What are the causes of an Aneurysmal Bone Cyst?

The aetiology of ABC’s are unclear and controversial.

Trauma. Trauma causes an inciting injury to peri-osteal vessels initiating the development of the ABC. However, a history of trauma can be difficult to prove in a large number of cases.

Subperiosteal intra-osseous hæmatoma is a secondary phenomena occurring in primary cystic lesions of bone or tumours.

Genetic predisposition. Some researchers have demonstrated that chromosomal translocation t(16;17) (q22; p13) is a cytogenic abnormality which could result in the development of ABCs.

They can arise de novo,when they are known as primary ABC, or in co-existence with other lesions such as ossifying fibroma (OF), chondroblastoma, solitary bone cyst, giant-cell tumour of the bone, osteosarcoma, osteoblastoma, giant cell reparative granuloma, fibrous dysplasia and fibro-myxoma when they are secondary in nature.

The secondary type is postulated to be associated with degeneration of pre-existing lesions such as a cyst, tumour or fibro-osseous lesion. The two lesions could exist independently.

Familial incidence of ABC has also been reported in literature.

Treatment of ABC is usually directed toward complete removal of the lesion. This may prove difficult at times since the lesions are often multi-locular and may be divided by multiple bony septæ.

Self-healing cases have also been reported on long-term follow-up.

Several authors recommend immediate reconstruction of the defect with auto-genous grafts in cases of æsthetic deformity, high risk of fractures or loss of mandibular continuity.

Simple curettage is associated with high recurrence rates varying from 21 to 50%.

J Oral Maxillofac Radiol 2014. Aneurysmal Bone Cyst of the Mandible. Report of a Case with a Review of the Literature