Simple Bone Cysts (SBC’s) are benign cysts that develop in children in their first two decades. Whilst normally found in the within the medulla of long bones, 10% occur in the jaws; 75% of these being in the body of the mandible (lower jaw).

SBC’s are predominantly seen in the mandible, more frequently involving the posterior region and less common in the anterior mandible (front of the lower jaw) / mandibular symphysis (midline lower jaw). They are more frequently seen during the 2nd decade of life and sex distribution is quite even.

It is relatively uncommon with a reported incidence of 0.6% (from a study of 3353 bone cysts) and tends to occur more frequently in males, presenting in the second and third decades. 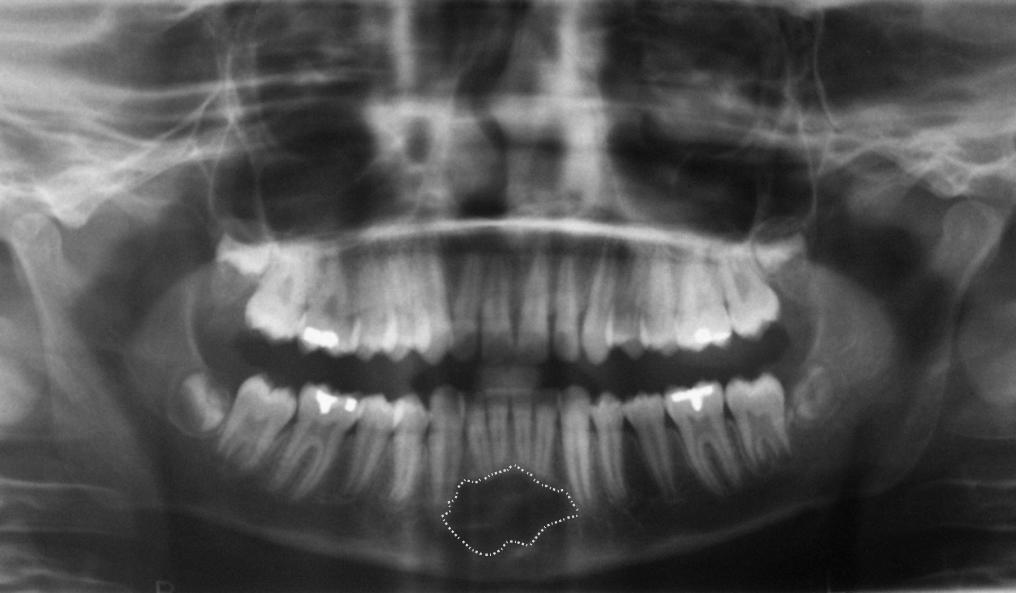 What are Solitary Bone Cysts (SBC’s)?

Simple Bone Cysts (SBC’s) are benign cysts that develop in children in their first two decades. Whilst normally found in the “long” bones, 10% occur in the jaws. The vast majority of these are in the mandible (lower jaw). They are more frequently seen during the 2nd decade of life and sex distribution is quite even.

What are the signs & symptoms?

Lesions are generally asymptomatic, however, a few authors have reported symptoms including pain, tooth sensitivity, paræsthesia and delayed displacement of the Inferior Dental Canal.

SBC’s are predominantly seen in the mandible, more frequently involving the posterior region and less common in the anterior mandible.

What are the causes of Solitary Bone Cysts (SBC’s)?

It has been speculated that SBC’s arise as a result of occlusal trauma, causing intra-medullary bleeding and aberrant healing with cavity formation (liquefactive necrosis or resorption of blood clot following intra-medullary hæmorrhage due to trauma results in the destruction of the surrounding bone by enzymatic activity, thereby causing enlargement of the bone cavity).

The content of the cavity depends on the length of the time that the cyst has existed. In the early stages, the cyst usually contains blood or sero-sanguineous fluid that lessens with the age of the lesion and eventually becomes empty. Since material for histological examination may be scant or non-existent, it is very often difficult for a definite histological diagnosis to be achieved. Indeed, the diagnosis of SBC can be established only after surgical exploration of the bone cavity.

The border of the SBC, although irregular, can vary from well-defined to a complete absence of cortical outline.

It is usually detected incidentally during routine radiographic examination, which can be attributed to the asymptomatic nature of the lesion. Radiographically, SBC’s usually appears as an uni-locular radiolucent area with an irregular, well-defined / partly well-defined outline and with / without a sclerotic lining around the periphery of the lesion.

Projection of the lesion into the inter-radicular bone spaces produces a scalloping effect around the roots of the associated teeth. Scalloping / inter-digitation between the roots of teeth was a common feature in 44 – 68% of the cases.

Root resorption is rather uncommon and the surrounding teeth are vital. The bone cavity may either be empty or present a thin connective tissue layer with a scant liquid content.

Loss of lamina dura is predominantly in patients over 30 years of age and there is minimal involvement in younger people.

Displacement of teeth and root resorption are rare although in one series they were reported in 9 and 22% of the cases, respectively.

The definite diagnosis of SBC is invariably achieved at surgery when an empty bone cavity without epithelial lining is observed, leaving very little except normal bone and occasional fibrous tissue curetted from the cavity wall for the histo-pathologist.

Sometimes, the cavity contains a straw-colored fluid / bright blood. Most of the histologic findings reveal fibrous connective tissue and normal bone. There is never any evidence of an epithelial lining. The lesion may exhibit areas of vascularity, fibrin, erythrocytes and occasional giant cells adjacent to the bone surface

Resolution usually takes about 6 months or longer, depending on the size of the lesion. The prognosis is usually good and recurrence is rare.

Other alternative treatments include use of allogenic materials like lyophilised bone, hydroxyl-apatite or gel foam to fill the bone cavity in cases where conventional management fails and dental implant rehabilitation is required.

Dent Update 2015. Case Report. An Unusual Finding of a Solitary Bone Cyst in a Patient with a Fractured Mandible