An apicectomy (also known as surgical endodontics, apical surgery or peri-radicular surgery) should be considered only when conventional endodontic root filling or re-treatment (root canal treatment) techniques have failed.

The medico-legal landscape of consent has been shaped by a number of cases, such as Chester v Afshar [2004], Montgomery v Lanarkshire Health Board [2015], Duce v Worcestershire Acute Hospitals NHS Trust [2018] amongst others, so that it is more patient-centred.

Many of the legal claims in surgical (& medical) cases occur as a result of “failure to warn”, i.e. lack of adequately documented and appropriate consent.

A pre-requisite for obtaining consent for a surgical (medical / dental) procedure from a patient, is a full exchange of information regarding any risks, drawbacks and limitations of the proposed treatment and any alternatives to it (even non-treatment).

The clinicians should provide the patient with as much information as is appropriate and relevant, that it should be in terms the patient understands & the risks should be personalised for that individual patient. Also, there should be enough time for the patient to understand the information given and get a second opinion if needs be.

The following list of warnings regarding apicectomies is neither exhaustive nor is it predictive. The most pertinent warnings have been included here.

You can expect the following. 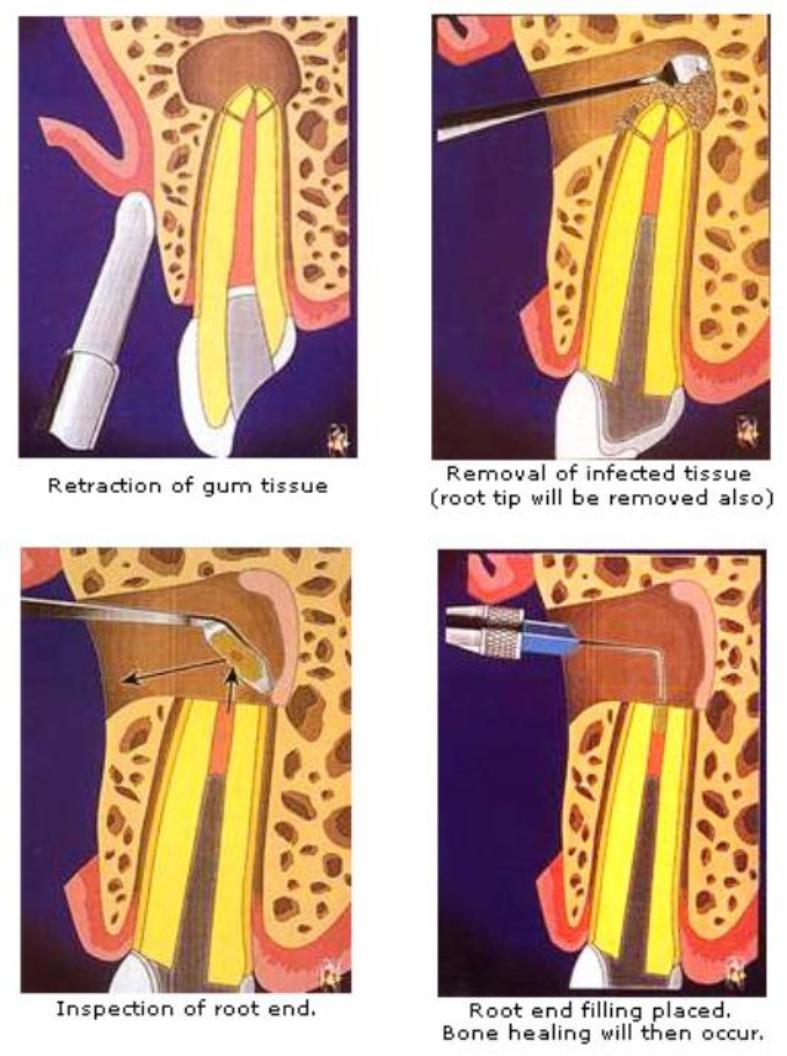 No / Incomplete Root Canal Treatment Reduces Operation Success.
If the tooth that is being operated on has no / incomplete root-canal filling than the operation success is much reduced. Ideally, the tooth should be root-canal treated (well) before it has an apicectomy.

Anatomical Considerations.
Certain teeth (such as premolars / bicuspids, molars & lower incisors) can be more tricky to treat and consequently, the success rate is not as high as one would hope. This is due to the anatomy of the tooth (e.g upper premolars have multiple canals within roots that may not have all been filled) and the anatomy of the mouth (e.g proximity to nerves & sinuses; thickened bone overlying the operation site; cheek bone buttresses hampering access and overactive muscles of facial expression again hampering access).

Operation Failure.
The operation can sometimes fail (80 – 96% chance of success). If so, it can be repeated however the chances of success become progressively smaller each time the operation is done anew (2nd time around, success rates drop to 30 – 35%).

Root Fracture.
Sometimes, it is not until the gum is peeled back & the root is in front of the surgeon that it will be noticed there is a root fracture. If this is the case, the tooth can not be salvaged. If this should happen, you will be given an option to have the tooth removed then & there.

Increased Tooth Mobility.
If the root tip is removed, as in an apicectomy, there is a consequent reduction in the root area of the tooth in contact with the bony socket. This has the effect of making the tooth very slight mobile. The more a tooth tip is cut back, the more mobile the tooth will be after the operation.

Gum Recession.
Often the tooth being operated is crowned/capped. After the operation, the gums will recede from the margins of the cap / crown. The recession is likely to worse if the tooth is in proximity to a frænum, a fibrous band linking the gum to the lips or cheek. The recession can be such that you may even consider having a new crown made with the crown margins hidden below gum-level.

Involvement Of Nerves & Subsequent Nerve Trauma.
The nerves that supply feeling to the tongue, lower lip and the chin run close to the root-ends of the molar teeth and exit onto the gum close to the roots of the premolars / bicuspids.

There is a risk that when lower teeth (especially the molars & bicuspids / premolars) have endodontic surgery, these nerves can be affected, resulting in numbness (at the worse end of the scale) to altered sensation (at the other end of the scale) in the region of the lower lip ± chin ± tongue. The nerves that supply feeling to the upper lip & gum run within the upper gums.

On operating on upper front teeth, these nerves can be affected resulting in numbness of the gum surrounding the tooth (though not the upper lips). This improves with time, should it occur. Alterations in nerve function tends to be temporary (rarely are they permanent) but ‘temporary’ often means several months.

Adjacent Teeth.
The surrounding teeth may be sore after the operation; they may even be slightly wobbly but the teeth should settle down with time. It is possible that the fillings or crowns of the surrounding teeth may come out, fracture or become loose. If this is the case you will need to go back to your dentist to have these sorted out.

Sometimes, in trying to apicect the tooth in question, the blood supply to the surrounding teeth may be compromised. This can lead to the death of adjacent teeth; if this is the case, they may need endodontic treatment.

Mouth-Sinus / Mouth-Floor of Nose Communications.
Upper back teeth often have their roots in close proximity to the floor of the nose or the sinus. In operating on the ends of these teeth, there is a chance that the sinus will be perforated (10 – 50% of cases). After the apicectomy, the perforation into the sinus will be closed however you are likely to have a acute +/- chronic sinusitis (a chronic sinusitis is more likely if root debris has gone into the sinus). There is a chance, on blowing your nose post-op, that you will get bleeding from the nose or sinus. This is treated with antibiotics, painkillers & decongestants.

Sub-Cutaneous (Surgical) Emphysema.
Very rarely, air can enter the skin around the apicectomy operation site and become trapped. This can lead to swelling, especially around the eyes or over the cheeks. This can be quite disconcerting however it slowly subsides and there is nothing really to worry about.

Pain.
As it is a surgical procedure, there will be soreness after the operation. This can last for several days. Painkillers such as ibuprofen, paracetamol, Solpadeine or Nurofen Plus are very effective. Obviously, the painkiller you use is dependent on your medical history & the ease with which the tooth was removed.

Swelling.
There will be swelling afterwards. This can last up to a week. Use of an icepack or a bag of frozen peas pressed against the cheek adjacent to the operation site will help to decrease the swelling. Avoidance in the first few hours post-op, of alcohol, exercise or hot foods / drinks will decrease the degree of swelling that will develop.

Bruising.
Some people are prone to bruise. Older people, people on aspirin or steroids will also bruise that much more easily. The bruising can look quite severe; this will eventually disappear but can take several weeks (in the worst cases).

Bleeding into Cheeks.
Swelling that does not resolve within a few days may be due to bleeding into the cheek. The cheek swelling will feel quite firm. Coupled with this, there may be limitation to mouth opening and bruising. Both the swelling, bruising and mouth opening will resolve with time.

Stitches.
The operation site will often be closed with stitches. These dissolve and ‘fall out’ within 10 – 14 days.

Limited Mouth Opening.
Often the chewing muscles and the jaw joints are sore after the procedure so that mouth opening can be limited for the next few days. If you are unlucky enough to develop an infection in operation site afterwards, this can make the limited mouth opening worse and last for longer.

Post-op Infection.
You may develop an infection in the operation site after the procedure. This tends to occur 2 – 4 days later and is characterised by a deep-seated throbbing pain, bad breath and an unpleasant taste in the mouth. This infection is more likely to occur if you are a smoker or are on the contraceptive pill or on drugs such as steroids.

If antibiotics are given, they are likely to react with alcohol ± the Contraceptive Pill (that is, the ‘Pill’ will not be providing protection).

Failure of Anæsthesia.
In rare cases, the tooth can be difficult to ‘numb up’. This can be due to a number of reasons. The more common ones include inflammation and / or infection associated with the tooth, anatomical differences & apprehension.

BDJ 2012. Update of Guidelines for Surgical Endodontics – the Position after 10 Years

BDJ 2018. Surgical Endodontics. Are the Guidelines being Followed A Pilot Survey

Royal College of Surgeons of England (Faculty of Dental Surgery)