What are Peripheral Ossifying Fibromata?

The Peripheral Ossifying Fibroma (POF) is a relatively common reactive growth on the gingiva (gum), with a characteristic histo-morphological pattern.

What are the Signs & Symptoms of a Peripheral Ossifying Fibroma?

POF’s occurs exclusively on the gingiva (often arising from the interdental papilla) and it is more common in children and young adults, with a female predilection. It is a fairly common lesion, comprising nearly 3% of oral lesions biopsied in 1 study, approximately 1 – 2% in other studies.

It presents as a well-defined, firm mass, sessile (flattish) or pedunculated (stalked), usually covered by smooth normal epithelium. The surface is frequently ulcerated due to mechanical trauma. Size varies from 5 – 20 mm in diameter. Approximately 60% of POFs occur in the maxilla (upper jaw) and they occur more often in the anterior (the front of the mouth) than the posterior (at the back of the mouth) area with 55 – 60% presenting in the incisor-cuspid (premolar) region. 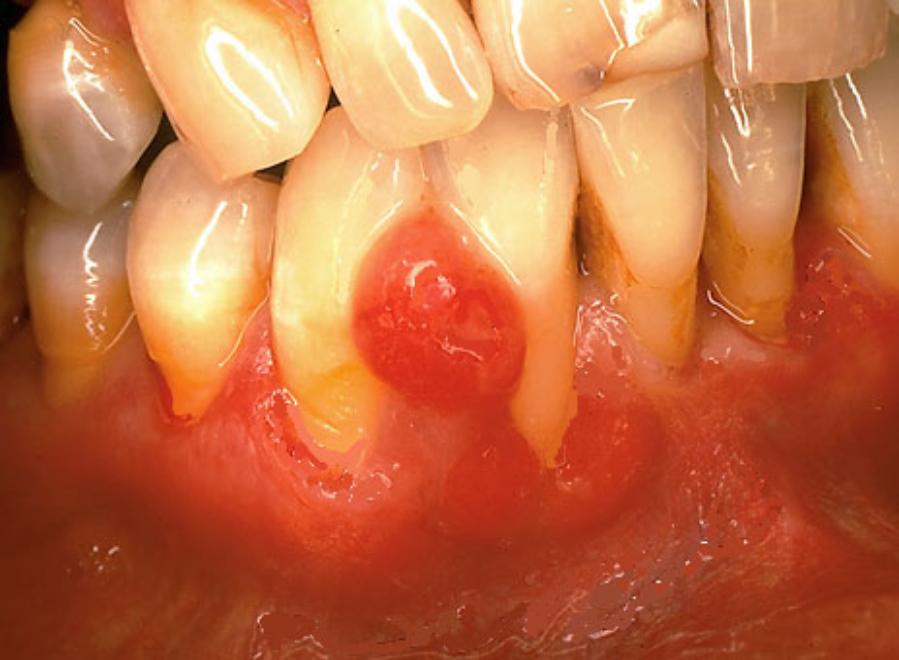 Cases of tooth migration and bone destruction have been reported, but these are not common.
There is a female preponderance (suggestive of a hormonal component). By most reports, the majority of the lesions occur in the second decade (peaks in teenage years), with a declining incidence in later years.

There are 2 reported cases of POF present at birth, presenting clinically as congenital epuli. POF’s appears to be more common among white people than black and slightly less common among those of Hispanic origin.

The lesion may be present for a number of months to years before excision, depending on the degree of ulceration, discomfort and interference with function.

What are the causes of Peripheral Ossifying Fibromata?

POFs are believed to arise from gingival fibres of the periodontal ligament as hyperplastic growth of tissue that is unique to the gingival mucosa.

Some researchers believe POF’s to be related to pyogenic fibromata and, in some instances, are the result of a pyogenic granuloma which has undergone fibrosis and calcification.

Do they come back?