What is an Odontome?

Odontomata are benign calcifying hamartomata and are the most common type of odontogenic harmartoma among patients younger than 20 years.

These hamartomata are composed of various dental tissues, that is, enamel, dentine, cementum and sometimes pulp.

They are classified as complex, when the calcified tissues present simply as an irregular mass composed mainly of mature tubular dentine or compound, if there is superficial anatomic similarity to rudimentary teeth (many seperate, small, tooth-like structures, denticles).

Odontomata are rare jaw lesions that affect less than 1% of the population. 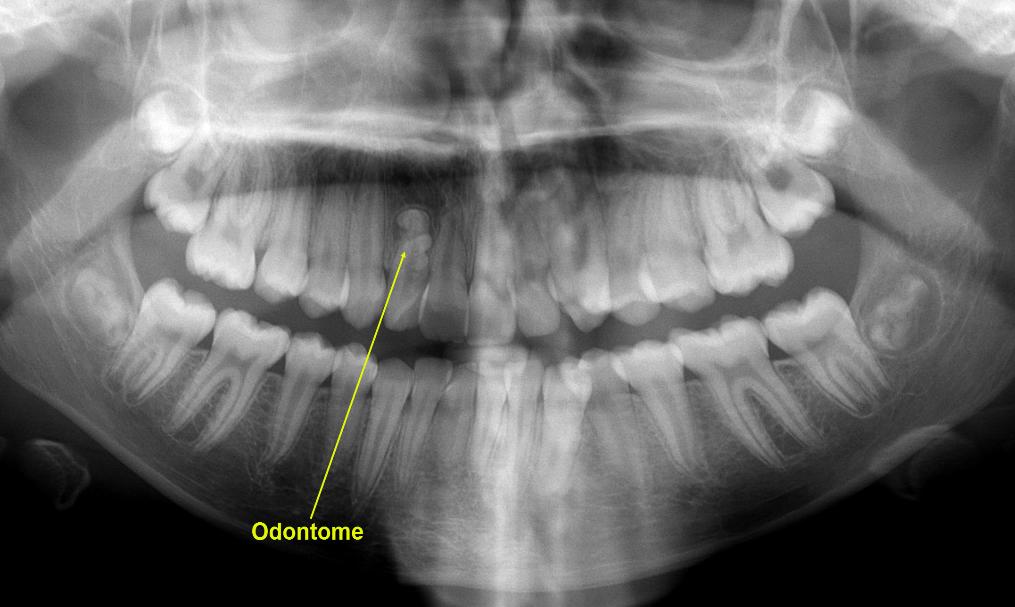 Complex odontomata tend to occur in the posterior (hindmost) region of the jaw and compound odontomata are more common in the anterior maxilla (front upper jaw). They may be discovered at any age although less than 10% are found in patients over 40 years of age.

In children, odontomes mainly result in eruption disturbances of the permanent teeth, whereas this is rare regarding the primary dentition (baby teeth).

Odontomata may be diagnosed at any age but they are usually detected during the first two decades of life. One study analyzed 396 cases and showed that diagnosis usually happens between ages 11 and 15 years. Another study, comprising 149 cases, concluded that the odontomes are detected most often during the second decade of life.

Many times, odontomata are found associated with unerupted teeth. The canines, followed by upper central incisors and 3rd molars (wisdom teeth), are the most frequent teeth impacted by odontomata.

In a very few instances odontomata are related to missing teeth. Generally, these malformations are intra-osseous (within the bone) but occasionally they may erupt into the oral cavity.

Although they are commonly asymptomatic, clinical indicators of odontoma may include retention of deciduous teeth (baby teeth), non-eruption of permanent teeth, pain, expansion of the cortical bone and tooth displacement.

Other symptoms include anaesthesia in the lower lip and swelling in the affected area.

Eruption of an odontoma through the mucosa could also allow invasion of oral micro-organisms into the bone due to lack of adequate adhesion between bone and odontoma because of the absence of periodontal ligament.

Odontomata can measure anywhere from a few millimetres to many centimetres in their greatest dimension. The largest found in a human weighed 0.3 kg.

Radiographic aspects of odontoma are characteristic.

The complex odontoma appears as an irregular mass of calcified material surrounded by a thin radio-lucent area with smooth periphery and the compound type shows calcified structures resembling teeth in the center of a well-defined radio-lucent lesion. A periodontal and peri-coronary space characteristic of unerupted teeth is seen around each tooth.

A developing odontoma can be discovered by routine radiography but may cause difficulty in identification due to lack of calcification.

JOMS 2008. Multiple Compound Odontomas in the Jaw – Case Report & Analysis of the Literature

Imaging Science in Dentistry 2012. Odontoma – A Retrospective Study of 73 Cases

Pediatr Dent 2018. Case Report. A Bag of Marbles – A Fascinating Compound Odontoma of the Maxilla