Bruxism (from the Greek βρυγμός “gnashing of teeth”) is characterized by the grinding of the teeth and is typically accompanied by the clenching of the jaw.

It is an oral para-functional activity that occurs in most humans at some time in their lives.

In most people, bruxism is mild enough not to be a health problem. While bruxism may be a diurnal (during the day) or nocturnal (during the night) activity, it is bruxism during sleep that causes the majority of health issues and can even occur during short naps.

Bruxism is one of the most common sleep disorders. 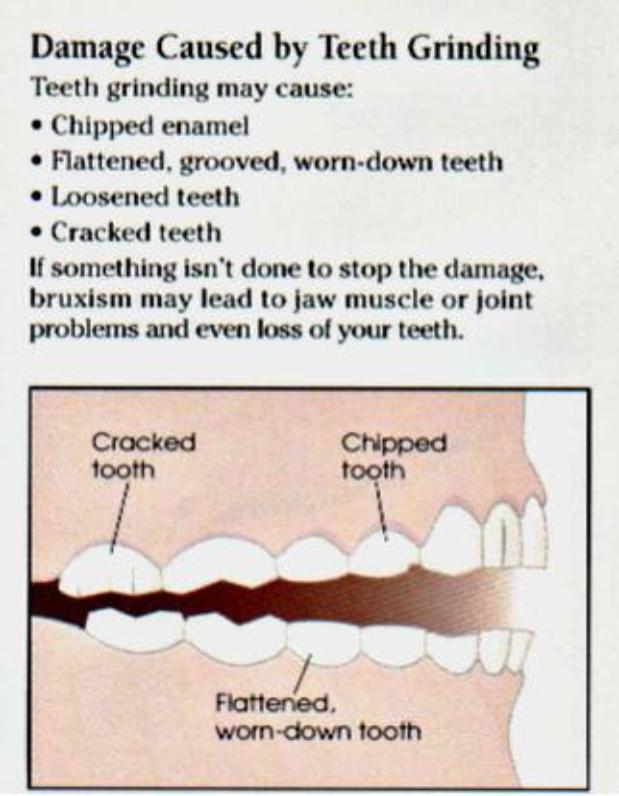 Bruxism is more accurately classified as a habit.

Some bruxism activity is rhythmic (like chewing) though some activity is sustained (clenching). Researchers classify bruxism as “a habitual behaviour and a sleep disorder”.

Most bruxists are not aware of their bruxism and only 5% go on to develop symptoms, such as jaw pain and headaches, which will require treatment. In many cases, a sleeping partner / parent will notice the bruxism before the person experiencing the problem becomes aware of it.

Bruxism can result in abnormal wear patterns of the biting surfaces of the teeth, abfractions and fractures in the teeth. This type of damage is categorised as a sign of occlusal trauma.

Over time, dental damage will usually occur. Bruxism is the leading cause of occlusal trauma and a significant cause of tooth loss and gum recession.

In a typical case, the canines and incisors of the opposing jaws are moved against each other laterally, i.e. with a side-to-side action, by the chewing muscles that lie on the inside of the jaw joints (medial pterygoid muscles). This movement abrades tooth structure and can lead to the wearing down of the biting (incisal) edges of the teeth. People with bruxism may also grind their back (posterior) teeth, which will wear down the cusps of the biting surface of the teeth.

Bruxism can be loud enough to wake a sleeping partner. Some individuals will clench the jaw without significant lateral movements. Teeth hollowed by previous decay (caries) or dental drilling, may collapse, as the cyclic pressure exerted by bruxism is extremely taxing on the tooth structure.

Patients may present with a variety of symptoms, including:

The following factors are associated with bruxism:

Bruxism may be reduced or even eliminated when the associated factors, e.g., sleep disorders, are treated
successfully.

Although there is no single accepted cure for bruxism, there are a number of treatments available.

Ongoing management of bruxism is based on minimising the abrasion of tooth surfaces by the wearing of an acrylic / soft plastic dental guard or splint (Bite Raising Appliances, BRA’s), designed to the shape of an individual’s upper or lower teeth. These are made by dentists.

BRA’s are thought to work in the following ways:

A BRA is typically worn on a long-term basis every night.

Although BRA’s are a first response to bruxism, they do not in fact help cure it. Professional treatment is recommended to ensure proper fit, make ongoing adjustments as needed and check that the occlusion (bite) has remained stable. Monitoring of the BRA is suggested at each dental visit.

Another type of device sometimes given to a bruxist is a repositioning splint.

A repositioning splint may look similar to a traditional BRA but is designed to change the bite (occlusion) of the patient. Scientific studies of these devices generally showed no benefit over more conservative therapies.

This is a development of a BRA’s. These are worn mainly at night. When the patient clenches, the metal ‘projections’ impinge on the roof of the mouth. This would wake or disturb the sleep of the clencher and would theorectically break the habit (eventually).

The NTI appliance fits on top of the teeth and alters the angle at which the jaw opens, by covering only the front teeth and preventing the molars from coming into contact with each other, thus limiting the contraction of the temporalis muscle. When the grinding starts in the night, the pressure which is applied to the incisors can, it is claimed, send an alarm signal to the brain.

The NTI device must be fitted by a dentist.

The efficacy of such devices is debated. Some writers propose that irreversible complications can result from the long-term use of mouthguards and repositioning splints.

Various bio-feedback devices are currently available and effectiveness varies significantly depending on whether the bio-feedback is used only during waking hours or during sleep as well.

Many authorities remain unconvinced of the efficacy of ‘daytime-only’ bio-feedback.

The efficacy of bio-feedback delivered during sleep can depend strongly on daytime training, which is used to establish a Pavlovian response to the bio-feedback signal that persists during sleep.

Cognitive Behavioural Therapy (CBT) aims to help the patient to manage their problems by changing how they think and act.

CBT encourages the patient to talk about:

Botulinum toxin (Botox) can be successful in lessening effects of bruxism.

Bruxism can also be regarded as a disorder of repetitive, unconscious contraction of the masseter muscle (the large muscle that moves the jaw). In the treatment of bruxism, Botox works to weaken the muscle enough to reduce the effects of grinding and clenching but not so much as to prevent proper use of the muscle. Injections must be repeated more than once per year.

The symptoms that can be helped by this procedure include:

The effects last for about three months. The muscles wither (atrophy), however, so after a few rounds of treatment, it is usually possible either to decrease the dose or increase the interval between treatments.

Other authorities caution that Botox should only be used for temporary relief for severe cases and should be followed by diagnosis and treatment to prevent future bruxism or jaw clenching, suggesting that prolonged use of Botox can lead to permanent damage to the jaw muscle.

Calcium is known to be a treatment for gastric problems, and gastric problems such as acid reflux are known to increase bruxism. Placing whole cloves at night inside the mouth is suggested to have an effect on the jaw’s muscle by relaxing it, yet evidence of this remains largely anecdotal without future research.

Evidence Based Dentistry 2009. The NTI-tss device may be used successfully in the management of bruxism & TMD

Bio Med Central Oral Health 2008. The NTI-tss device for the therapy of bruxism, temporomandibular disorders and headache – Where do we stand. A qualitative systematic review of the literature.

Nociceptive Trigeminal Inhibition Tension Suppression System – How Does It Work

The Daily Mail, March 2009 – How to stop teeth-grinding … with a little help from Botox

American Dental Association 2005. Do You Grind Your Teeth?

BBC News – Why are we grinding our teeth so much?