An Epulis is a ‘lump on the gum’. Epulides are the most common type of lump on the gum and can best be described as long-term inflamed hyperplasia (an excessive growth of normal cells).

They are caused by trauma (repeated chewing of a lip or tongue) and long-term irritation or friction by such things as badly fitting dentures, fillings and crowns, plaque and rough tooth edges.

In more than 80% cases, an epulis will form in front of the molars (large back teeth) and they are more common on the upper jaw than the lower. Epulides are more common in women than in men. 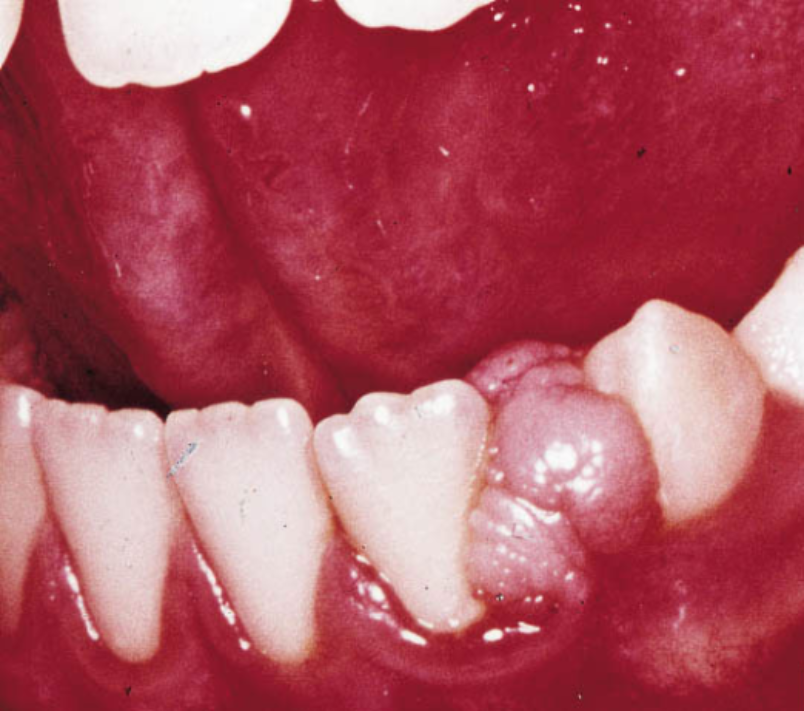 These growths can appear as either a flat mass or have a ‘stalk’.

They are normally the same colour and texture as the gum around the growth but the surface of the epulis may be ulcerated and covered by a yellow, fibrous membrane.

This type of epulis affects a wide age range of people but most patients are between 11 and 40-years old.

Under the microscope, the Pyogenic Granuloma and the Pregnancy Epulis look the same.

They appear as soft, deep reddish-purple swellings and are often ulcerated. They are found mostly on the gums but can also be seen on the tongue, cheek and lips as a result of trauma. They may bleed, either spontaneously or if they are touched or knocked.

Pregnancy epulides can arise anytime during pregnancy. While they may often recur (despite removal) during the pregnancy, they may disappear after the baby is born.

After the birth, some pregnancy epulides will become fibrous epulides.

They are surgically removed under Local Anæsthetic as in a biopsy.

Int J Appl Dent Sci 2019. Management of a Pyogenic Granuloma of the Tongue – A Case Report & Review of the Literature

J IMAB 2019. Pyogenic Granulomas in the Oral Cavity – A Series of Cases