Necrotising Sialadenometaplasia / Sialometaplasia is an uncommon, usually self-limiting, variably ulcerated, benign (i.e. non-cancerous), inflammatory process, predominantly affecting salivary tissue (any site in the body that contains elements of the salivary gland, from the para-nasal sinuses to the lung).

The importance of the lesion is that it mimics the appearance of malignant disease, both clinically and microscopically. Failure to recognize necrotising sialometaplasia may result in unnecessary radical surgery because of an erroneous pre-operative diagnosis of squamous cell carcinoma or muco-epidermoid carcinoma. 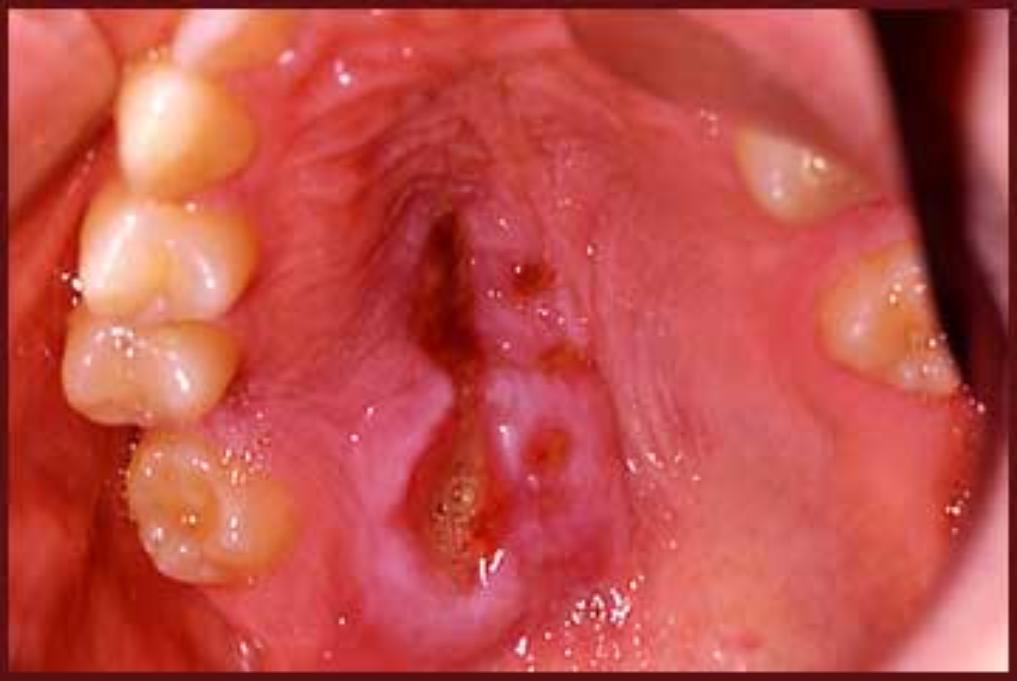 Although the ætio-pathogenesis of necrotising sialometaplasia remains unknown there is general consensus that a reduced blood flow (ischæmic) event in the salivary gland precedes the development of the lesion.

This condition may occur after local trauma, including surgical manipulation or injection of local anæsthesia into the involved area.

For patients who have had surgery, the lesion becomes clinically evident in about 3 weeks or longer. Necrotising sialometaplasia may also appear spontaneously, often without the history of prior surgical or traumatic event. No particular oral condition or habit has been associated with this condition to date.

The disease has been reported in patients with vasculopathies which predispose to ischæmia (such as Sickle Cell Disease, where infarction may be a feature in crisis, Buerger’s disease and Raynaud’s phenomenon).

Addition of a vaso-constrictor (such as adrenaline) to local anæsthetic solutions, local radiotherapy, cocaine use, pressure from local space-occupying lesions and surgery have also been implicated. The lesion may be more florid in pregnancy.

There is also an association with preceding upper respiratory tract infection within the previous few weeks, particularly acute on chronic sinusitis and allergy. It is possible that the ischæmic event in these cases is due to immune complex disease, similar to the ætiology of erythema multiforme or benign trigeminal sensory neuropathy.

It has been suggested that necrotising sialometaplasia of the palate may represent an ulcerative or necrotising stage of smoker’s keratosis although this now seems unlikely.

Other predisposing factors include:

There may be an association with tumours, specifically:

Men are affected approximately twice as often as women. Mean age of occurrence in men is about 50 years and 36 years in women (the youngest reported case is 15 years). There appears to be an increased incidence in males. There was a 5:1 preponderance of Caucasians over Afro-Caribbeans.

Necrotising sialometaplasia is extremely rare – there are barely 200 cases reported in the world literature.

The vast majority (80%) of cases affect the minor salivary glands of the palate, while other sites include gum behind the lower wisdom teeth (retro-molar pad), lip, tongue and cheek.

At extra-salivary sites, the lesion may be described as adenometaplasia. A similar lesion occurs in the skin, termed syringometaplasia and similar histo-pathological appearances have been described in the breast following trauma.

The lesion has a sudden onset, and is clinically characterized by a nodular swelling that leads to a painful, crater- like ulcer, 1 – 5 cm in diameter, with an irregular, ragged border. The lesion mimics a carcinoma and is usually located on the posterior palate (most commonly at the junction of the hard and soft palates).

Symptoms are generally disproportionately slight, compared with the size of the lesion. Most patients indicate surprisingly mild complaints of tenderness or dull pain. Pain may also be a feature at the onset and may be intense and referral of the pain to the ear, eye and pharynx are variable features which have been reported. However, development of the lesion may be painless and there are even reports of anæsthesia of the Greater Palatine Nerve as the presenting feature. This is thought to be caused by involvement of the vasa nervorum in the vasculitic ætiological process.

The lesions may occur bilaterally and metachronously.

When ulceration occurs, it usually remains superficial, but a single case of full-thickness necrosis of the palate has been reported.

Injection of anti-inflammatory steroids into the lesions appears to offer no benefit on recovery time of the lesion or associated anæsthesia.

Differential diagnosis of an ulcer presenting with these features could include:

How is it treated?

The usual management of this condition is simple observation until the healing phase is complete.

The prognosis is excellent, once the correct diagnosis is made.

There are no known preventative strategies.

If the lesions are large, incisional biopsy should be done to establish a definitive diagnosis.

Healing takes place over several weeks by secondary intention. Reassuring the patient and lavaging the wound with irrigation or rinsing may be helpful. Once the lesion has healed, recurrence and functional impairment are not anticipated.

JOMS 2013. Necrotizing Sialometaplasia in a Patient with an Eating Disorder – Palatal Ulcer Accompanied by Dental Erosion Due to Binge-Purging

BDJ 2015. Letters to the Editor. Case Report. Palatal mucosal necrosis after administration of a palatal infiltration

Med Buccale Chir Buccale 2017. Persistent Ulceration of the Oral Floor – A Case of Necrotizing Sialometaplasia of the Sublingual Gland?