Sialolithiasis (Salivary Gland Stones) is the most common disease of the salivary glands. It is affects 12 in 1000 of the adult population; men are affected twice as much as women; children are rarely affected. 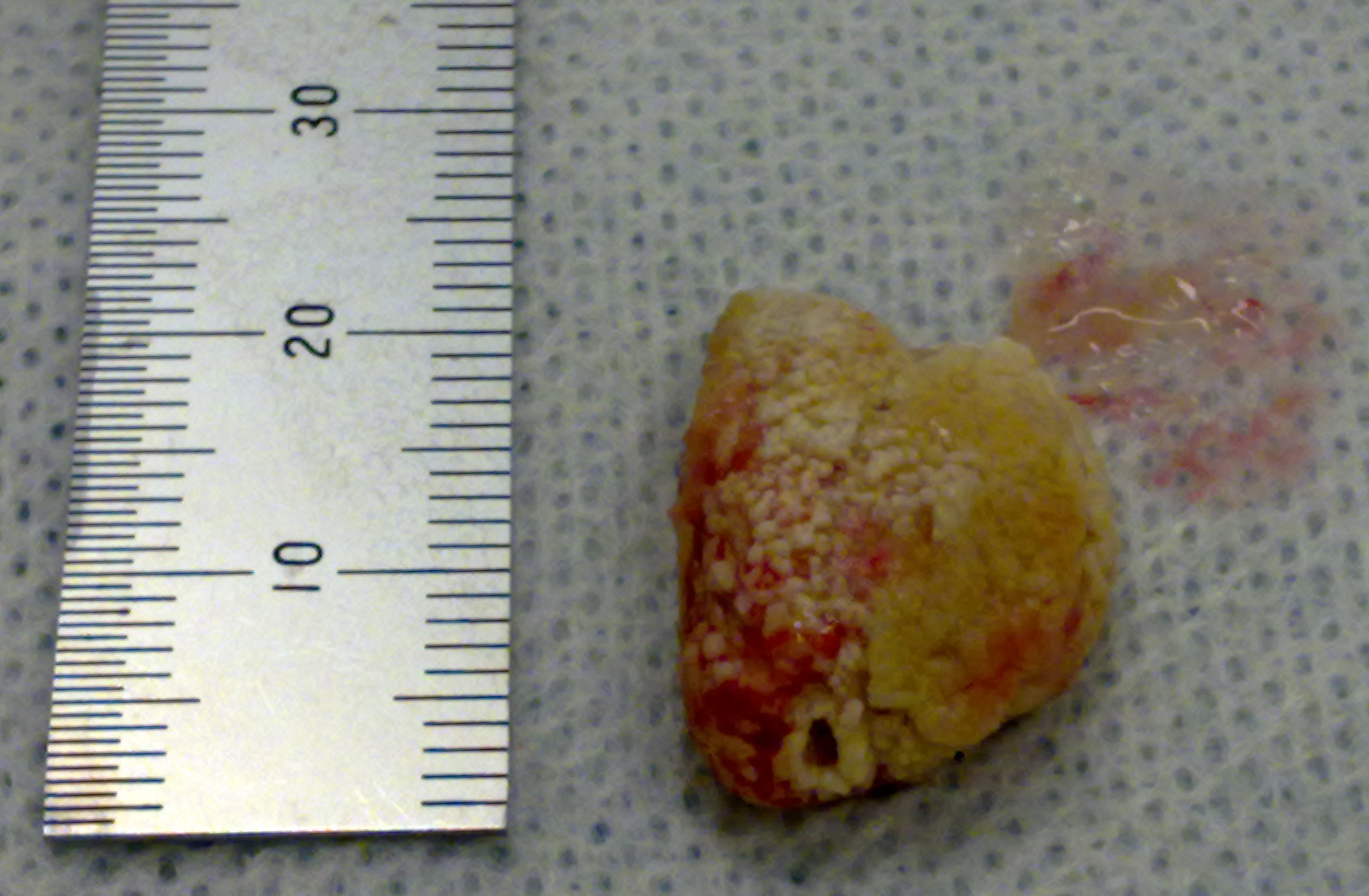 Photos of Sialoliths removed from the Submandibular Duct

Careful history and examination are important in the diagnosis of sialolithiasis (in fact, in all aspects of medicine & dentistry). Pain and swelling of the concerned gland at meal-times and in response to other salivary stimuli are especially important. Complete obstruction of the salivary duct by a salivary stone causes constant pain and swelling; pus may be seen draining from the duct and signs of systemic infection may be present.

Imaging studies are very useful for diagnosing sialolithiasis. Occlusal radiographs (X-rays of the floor of the mouth) are useful in showing (radio-opaque) stones.

Sialography is useful in patients showing signs of sialadenitis related to (radio-lucent) stones or deep submandibular / parotid stones. Sialography is, however, contra-indicated in acute infection or in marked contrast allergy (i.e. an allergy to the contrast media pumped into the duct and gland).

What does the treatment involve?

There are various methods available for the management of salivary stones, depending on the gland affected and stone location.

Patients presenting with sialolithiasis may benefit from a trial of conservative management especially if the stone is small.

The patient must be well hydrated (that is, drink frequently) and must apply moist warm heat and massage the involved salivary gland, while sialogogues are used to promote saliva production and flush the stone out of the duct.

With gland swelling and sialolithiasis, infection should be assumed and antibiotics prescribed. Most stones will respond to such a regimen, combined with simple sialolithotomy when required.

If the stone is sufficiently forward in the salivary duct, it can be “milked” and manipulated through the duct opening; this can be done with the aid of lacrimal probes and dilators to open the duct.

Once open, the stone can be identified, “milked” forward, grasped and removed. The gland is then “milked” to remove any other debris in the more posterior (back) portion of the duct.

Almost half of the Submandibular Calculi lie in the distal third of the duct and are amenable to simple surgical release through an incision (cut) directly onto the stone. In this way more posterior stones, 1 – 2 cm from the salivary duct punctum, can be removed by cutting directly onto the stone in the longitudinal axis of the duct. Care is taken as the Lingual Nerve. lies deep to the duct, but in close association with the Submandibular Duct posteriorly. Subsequently, the stone can be grasped and removed. No closure is done leaving the duct open for drainage.

If the Submandibular Gland has been damaged by recurrent infection and fibrosis or calculi have formed within the gland, the gland may require removal.

Alternative methods of treatment have emerged such as the use of Extracorporeal Shock Wave Lithotripsy (ESWL) and more recently the use of Endoscopic Intracorporeal Shockwave Lithotripsy (EISWL), in which shockwaves are delivered directly to the surface of the stone lodged within the duct without damaging adjacent tissue (piezoelectric principle). Both extra and intra-corporeal lithotripsy are gaining increasing importance in the treatment of Salivary Stone Disease.

Submandibular Gland Removal may be indicated following failure of lithotripsy or if the size of an intra-glandular stone is > 12 mm as the success of lithotripsy may be < 20% in such cases.

In the case of small calculi, the treatment of choice should be medical, instead of surgical. The patient can be administered natural sialogogues such as small slices of lemon or sialogogue medication (such as pilocarpine) removal.

Surgical removal of the calculus (or even of the whole gland) has traditionally been used as an alternative to medical therapy, whenever the latter was not possible or when it proved ineffective.

How long will the operation take?

It can be very quick (a few minutes). If the stone is big or difficult to access, it can take that much longer.

What can I expect after the operation?

It is unlikely to be very sore but regular painkillers will be arranged for you. There is relatively little swelling following salivary stone removal.

Do I need any time off work?

Possibly only for the day of the operation.

Will I have a scar?

What are the possible complications?

The medico-legal landscape of consent has been shaped by a number of cases, such as Chester v Afshar [2004], Montgomery v Lanarkshire Health Board [2015], Duce v Worcestershire Acute Hospitals NHS Trust [2018] amongst others, so that it is more patient-centred.

Many of the legal claims in surgical (& medical) cases occur as a result of “failure to warn”, i.e. lack of adequately documented and appropriate consent.

A pre-requisite for obtaining consent for a surgical (medical / dental) procedure from a patient, is a full exchange of information regarding any risks, drawbacks and limitations of the proposed treatment and any alternatives to it (even non-treatment).

The clinicians should provide the patient with as much information as is appropriate and relevant, that it should be in terms the patient understands & the risks should be personalised for that individual patient. Also, there should be enough time for the patient to understand the information given and get a second opinion if needs be.

There are potential complications with any operation. Fortunately, with this type of surgery complications are rare and may not happen to you.

The following list of warnings regarding sialolith release is neither exhaustive nor is it predictive. The most pertinent warnings have been included here.

Are there are any long-term effects of having my (Submandibular / Sub-Lingual) salivary stones removed?

Will I need further appointments?

Dental Update 2006. A Revolution in the Management of Obstructive Salivary Gland Disease.

JOMS 2007. Giant Sialolith – Case Report and Review of the Literature

Acta Otorrinolaringol Esp 2008. Sialoendoscopy – A New Alternative for the Treatment of Salivary Pathology. Our Experience

BJOMS 2009. Recent advances in the management of salivary gland disease.

Otolaryngol Clin N Am 42 2009. Alternatives for the Treatment of Salivary Duct Obstruction

Dental Update 2011. Incidental Finding of Sialolithiasis in the Sublingual Gland – A Diagnostic Dilemma