Removal of Wisdom Teeth is one of the most common surgical procedures performed in the UK.

There is no reliable research evidence to support a health benefit to patients from the prophylactic removal of pathology-free impacted third molar teeth. 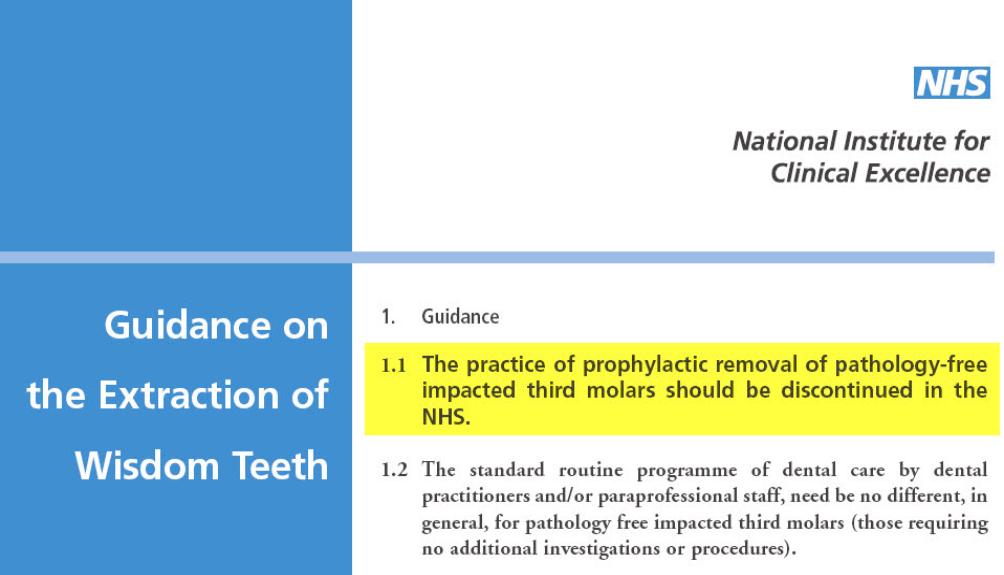 Every wisdom tooth carries risk for the patient, including temporary or permanent nerve damage, alveolar osteitis, infection and hæmorrhage as well as temporary local swelling, pain and restricted mouth opening.

There are also risks associated with the need for general anæsthesia in some of these procedures, including rare and unpredictable death. Such patients are therefore being exposed to the risk of undertaking a surgical procedure unnecessarily.

Guidelines for the removal of Wisdom Teeth have been developed over the years by the Royal College of Surgeons of England and Scottish Intercollegiate Guidelines Network.

The Oral & Maxillofacial Surgeons (often consultants looking to their private practice) will ‘cherry pick’ from all 3 sets of guidelines.

Some dentists refer in patients for a ‘job-lot’ removal of all 3rd molars (often seen with South African and Antipodean dentists) even though the clinical need doesn’t warrant it.

The Guidelines boil down to waiting for some pathology to develop, such as decay in the wisdom tooth or the adjacent tooth, gum disease around the wisdom tooth, infection around the tooth crown, cellulitis, abscess and including cyst / tumour, tooth / teeth impeding surgery or reconstructive jaw surgery and when a tooth is involved in or within the field of tumour resection etc.

This is regarded by some as supervised neglect.

Upper wisdom teeth and / or if the patient is having a General Anæsthetic (GA) to remove wisdom tooth / teeth, seems to be a conundrum for some clinicians.

What is often cited is, that if the patient is having a GA, then the upper ones should be removed as well as the lower ones.

The upper 3rd molars, once the lower ones have been removed, may do one of 3 things:
1. Nothing
2. Start to erupt and then ‘run out of steam’ or
3. Erupt and start to traumatise the lower mucosa.

When the latter stage has been arrived at, then I think you should consider removal of the upper 3rd molar.

Also, there is the argument that the upper third molar is functionless and hence should be removed. Why? Is there an indication for this in the guidelines? Is it due to a wish to tidy things up? Often, the rationale is again for prophylactic reasons.

The NICE guidelines are presently under review. The revised guidelines were supposedly to be published in June 2017.