It is also known as Gustatory Hyper-Hydrosis, Auriculo-Temporal Syndrome or Baillarger Syndrome.

Frey’s Syndrome (FS) is the phenomenon secondary to gustatory stimulus, manifested by flushing and sweating of parotid, frontal and sub-mandibular areas consequent to trauma to the parotid or another major salivary glands (ie sub-mandibular or sub-lingual) often either after a parotidectomy [link to Superficial Parotidectomy webpage] or excision of the sub-mandibular gland [link to Submandibular Gland Removal webpage].

In other words, FS is characterised by excessive sweating of the forehead, upper lip, peri-oral region or sternum subsequent to gustatory stimuli.  Other regions can be affected in FS. 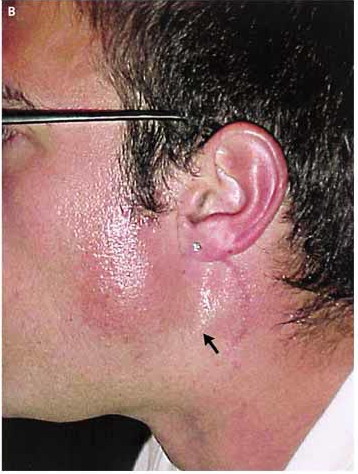 The Auriculo-Temporal Syndrome features facial flushing or sweating limited to the distribution of the Auriculo-Temporal Nerve [files/Auriculo-Temporal_Nerve.jpg] and may develop after trauma to the Parotid Gland, in association with parotid neoplasms (benign / malignant cancers) or following their surgical removal [link to Superficial Parotidectomy webpage].

FS is more commonly seen after:

FS is an unusual complication after Sub-Mandibular Salivary Gland Excision [link to Submandibular Gland Removal webpage] and neck dissections.  When reported in relation to neck dissection, it has been associated with ‘radical’ neck dissections, particularly for thyroid cancer and has tended to occur in the sub-mandibular area on the upper skin flap.

FS has been reported in > 60% of patients but is usually symptomatic in < 10% who seek treatment.

Parotid Gland.  FS is believed to be the result of mis-directed autonomic nerve regeneration following injury to the parotid region.  After injury, the sectioned post-ganglionic secreto-motor para-sympathetic fibres (Auriculo-Temporal Nerves) which normally innervate the Parotid Gland, become connected to sympathetic receptors which innervate sweat glands.  Hence, stimuli that normally cause salivation (aromatic foods, thinking about certain foods) simultaneously cause pathologic sweating and flushing in the pre-auricular area on the side of the nerve injury.

Other nerves might be involved such as the Facial Nerve, the anterior & posterior branches of the Greater Auricular Nerve & the Lesser Occipital nerves served as guiding structures for the regenerating parasympathetic nerve fibres.  Although FS does not cause significant physiological harm, profuse gustatory flushing and sweating can cause social and psychological distress in some patients. 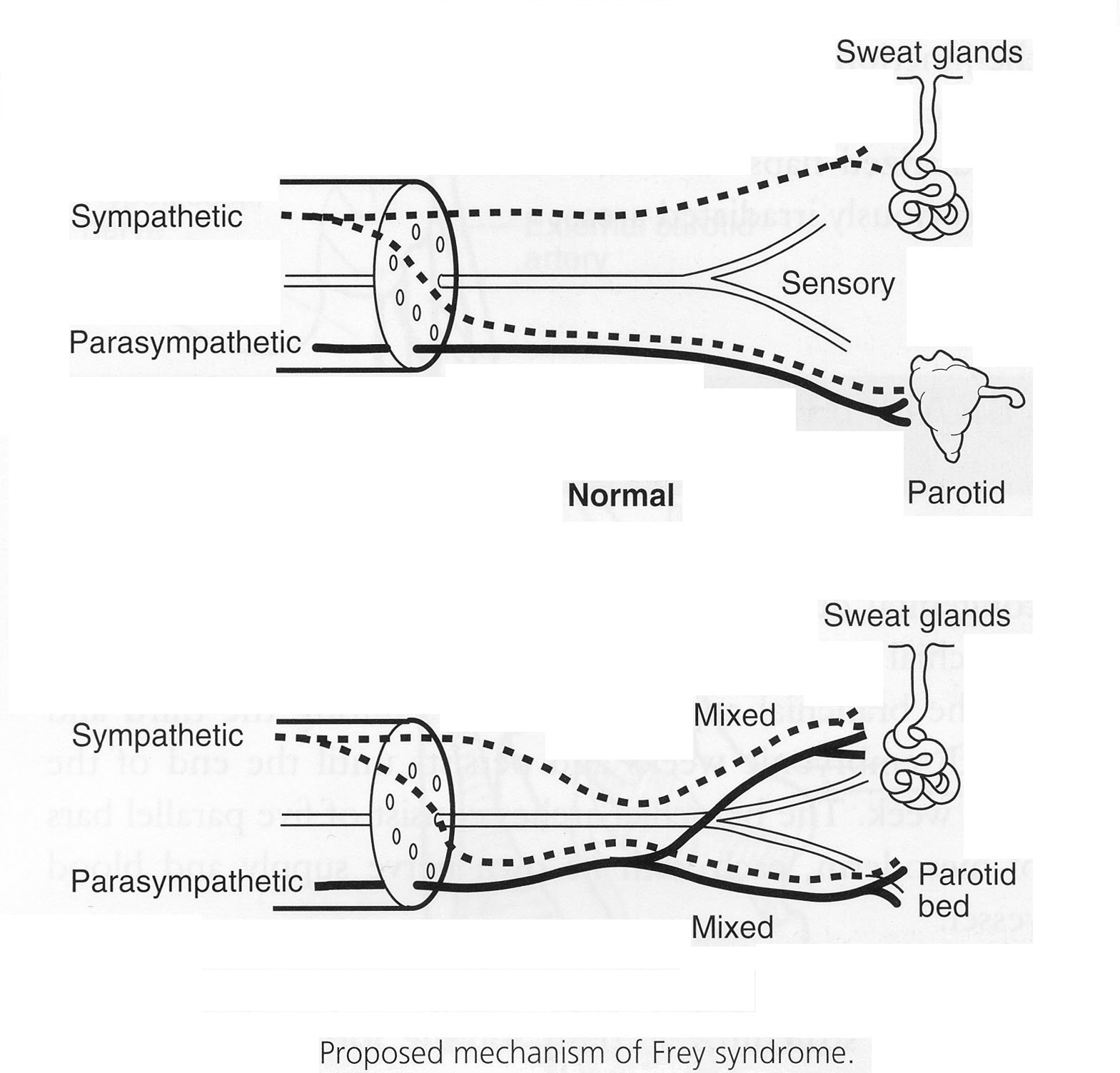 FS / Hyperhidrosis is diagnosed by history and examination but can be confirmed with the iodine and starch test (apply iodine solution to the affected area, let dry, dust on corn starch: areas of sweating appear dark).

Testing is necessary only to confirm foci of sweating (as in FS or to locate the area needing surgical or botulinum toxin treatment) or in a semi-quantitative way when following the course of treatment.

This test entails ‘painting’ the affected side of the face with iodine and waiting for it to dry.  The area is subsequently powdered with cornstarch which renders visible the sweating reaction. To elicit salivation / sweating, the patient is then asked to chew a lemon slice for 5 minutes.  The appearance of black spots over the starched field constitutes a positive result, generated by a chemical reaction between iodine, dissolved starch and sweat, confirming sudoresis (sweating) secondary to gustation.

The margins of the black spots are drawn with a ball-point pen.

As alluded to earlier, the black spots can be used to pinpoint where to use the Botox and gives a semi-quantitative recording of how the gustatory sweating is improving (or not).

The Minor Starch-Iodine Test has drawbacks:

Other methods have been tried but have not gained widespread usage.

In most cases, FS patients do not complain of their symptoms and are often treated effectively with topical anti-perspirant gels applied to the affected area.

However, when symptoms become bothersome, various prophylactic and therapeutic surgical strategies have been proposed to minimise the incidence or severity of FS following Parotidectomy [link to Superficial Parotidectomy webpage].

None of these approaches allows a definitive cure and relief is only temporary.  Botox appears to be the easiest and safest method that provides the longest period of relief with the lowest morbidity & adverse incidents rates.

However, none of these surgical procedures results in definitive cures because anastomotic connections between the Greater & Lesser Superficial Petrosal Nerves allow aberrant regeneration pathways and none is without significant risk of major morbidity. 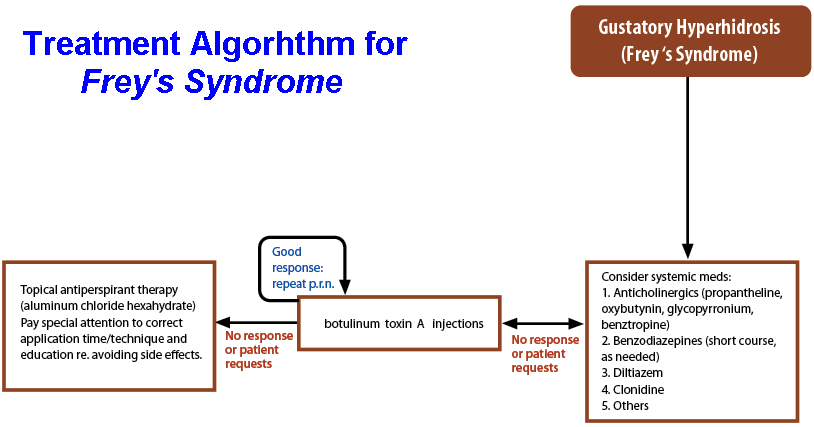 Clin Auton Res 2002.  Historical Note.  Understanding Gustatory Sweating.  What have we learnt from Lucja Frey and her predecessors.

The Open Dermatology Journal 2009.  Hyperhidrosis – A Review of a Medical Condition.

BJOMS 2009.  Short communication.  An unusual cause of Frey syndrome.

Cochrane Collaboration 2012.  Interventions for the Treatment of Frey’s Syndrome (Protocol).