Following the administration of a local anæsthetic, a minority of patients may suffer one of a range of unwanted symptoms.

Some of these symptoms can be mistaken for hypersensitivity or allergy & the patient unnecessarily told they are allergic to the anæsthetic.  Mislabelling of patients as allergic to local anæsthetic can lead to problems for dentists with patients unable to undergo routine dental treatment.

Local Anæsthetics can be categorised into 2 classes:

True allergy to an amide local anæsthetic is exceedingly rare.

Local anæsthetics of the ester type are more likely to produce allergic reactions as they are metabolised to para-aminobenzoic acid (PABA) which is an allergenic compound.  The only ester local anæsthetic used in dentistry is benzocaine, which is used in topical preparations applied prior to administration of local anæsthetic injections.

An allergy to one ester local anæsthetic contra-indicates the use of another ester, as the metabolism of all esters yields PABA.

Patients are unlikely to show cross sensitivity to amide local anæsthetics as these are not metabolised to PABA. 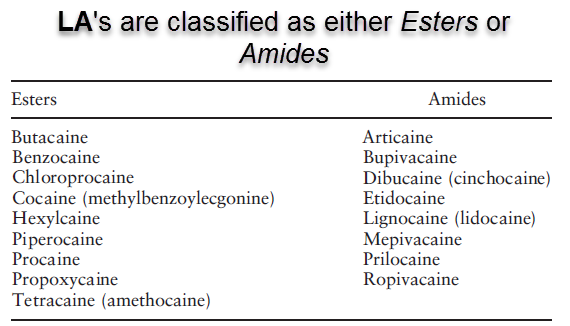 Local anæsthetic are considered relatively safe but, given the high number of injections that are administered, adverse reactions are inevitable.

Adverse systemic reactions to local anæsthetics can be divided into 3 categories:

A true allergy to local anæsthetics may be either type I or type IV.

Type I; immediate anaphylactic reactions mediated by IgE antibodies.  Signs and symptoms of Type I Allergy tend to occur within minutes of giving the injection:

Adverse reactions commonly mistaken for hyper-sensitivity reactions include syncope (fainting), panic attacks & toxic effects due to inadvertent entry of the drug into the circulation.

The following are possible differential diagnoses and their symptoms:

Psychogenic reactions (originating in the mind, an emotional response) are one of the most common adverse reactions associated with local anæsthetic use in dentistry.

They may manifest in many ways, the most common being syncope but other symptoms include panic attack, hyper-ventilation (rapid breathing), nausea (feeling sick), vomiting & alterations in heart rate or blood pressure, which may cause pallor (paleness).

They can be misdiagnosed as allergic reactions & may also mimic them with signs such as flushing of the skin, blotchy red rash, & œdema (swelling) & broncho-spasm (shortness of breath).  All patients have some degree of autonomic response to injections, ranging from slight tachycardia (increased heart rate) & sweating to syncope (fainting).

Toxic reactions may occur if high levels of local anæsthetic enter the blood stream.  Local anæsthetics can reach the systemic circulation as a result of repeated injections, inadvertent intra-vascular administration or overdose in those patients who have problems eliminating or metabolising the local anæsthetic.

When a patient experiences signs & symptoms that are suggestive of an allergic reaction, possible alternative causes should be considered such as contact with other common allergens, toxic dose or a psychogenic reaction.

The possible causes of the symptoms experienced should be discussed with the patient.

Use of the terms “allergic” & “allergy” should be avoided when discussing any adverse event as these terms are recognised by patients & readily adopted as the explanation.

Adverse reactions caused by toxicity or anxiety can be minimised by:

Management of a Patient When Local Anæsthetic Allergy Is Strongly Suspected

If symptoms suggestive of a true allergic reaction occur (localised reaction consisting of swelling, erythema, an itchy rash or systemic features such as dyspnœa, wheezing, widespread skin rash or circulatory collapse), the patient should be given emergency treatment following the Emergency Treatment Of Anaphylaxis Guidelines [www.resus.org.uk/pages/medental.htm].

If the patient feels unwell, their condition is deteriorating or they are very distressed, they should be transferred to hospital.

The patient should be referred for further investigation to confirm if the local anæsthetic or another possible allergen (e.g. preservative or latex) was the cause of the adverse effects.

If the cause of the symptoms is uncertain, dentists should contact the local (dental) hospital to discuss referring the patient for further investigation.

Alternatively, if a true allergic reaction is suspected, patients can be referred by the dentist or GP directly to the ‘allergy clinic’ at their local hospital, if this service is available.

Location and contact details for allergy clinics can be found via the British Society for Allergy and Clinical Immunology website [www.bsaci.org].  Alternatively, several dental hospitals run this service (such as Guy’s Dental School).

Very rarely, allergy to the local anæsthetic is confirmed.  In these cases, immunological testing should be extended to other Local anæsthetics in order to identify a safe alternative for future dental procedures.

New patients who claim to have had an allergic reaction to a local anæsthetic should be carefully questioned to obtain a history of past events.

These details may be more reliably obtained from the patient’s previous dentist.

Questions to ask the patient or previous dentist include:

If further information obtained strongly suggests an allergy but no details are available, refer the patient for allergy testing.

If no information is available from the patient or dentist, contact the GP who may have information about previous local anæsthetic exposure or other relevant knowledge.

If it is strongly suspected that the patient has previously suffered an allergic reaction to a local anæsthetic & emergency dental treatment is required, consider contacting a local hospital Dental / Oral Surgery department to discuss management & referral to a unit that has full resuscitation facilities available.

Anesth Prog 1997.  The Incidence of Complications Associated with Local Anesthesia in Dentistry

BDJ 2000.  Case Study.  Adverse Reaction to Dental Local Anaesthetic Injection.  Allergy is not the cause

Am J Med Sci 2007.  Approach to Patients with Suspected Hypersensitivity to Local Anesthetics