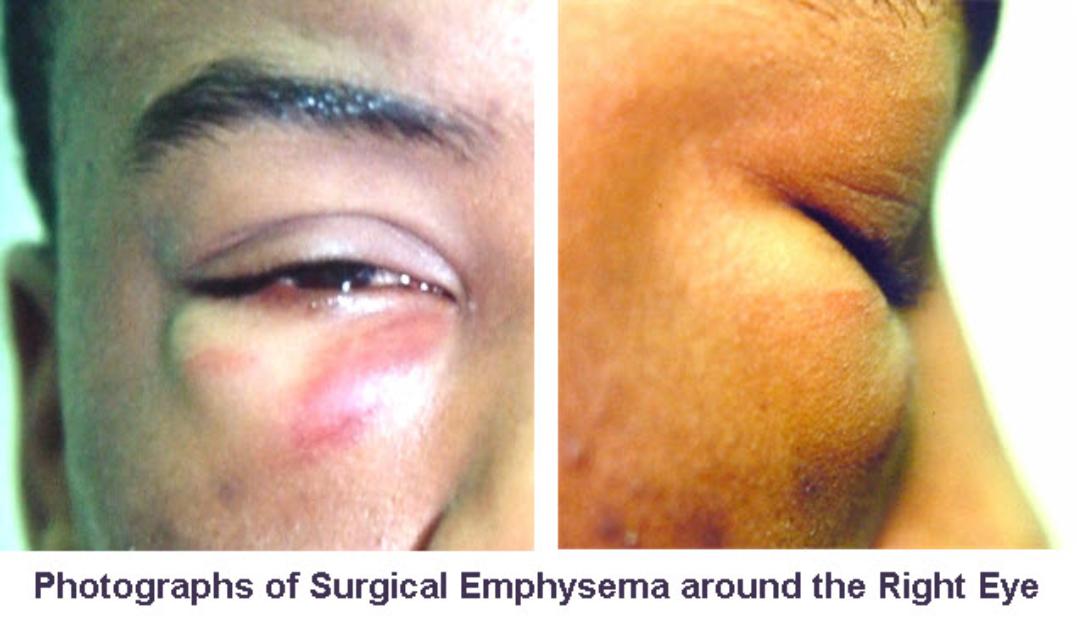 Sub-cutaneous emphysema can be defined as the collection of air (or another gas) below the sub-cutaneous tissues (in this case of the head and the neck).

Sub-cutaneous emphysema due to dental procedures is uncommon.

In the dental setting, it usually occurs when high speed dental hand-pieces are being used and the dental bur lacerates the adjacent mucosa.

These hand-pieces are air-turbine driven and expel high pressure air downwards towards the cutting surface of the bur. Once a breach in the mucosa is made, air under pressure is able to track sub-cutaneously.

Although alarming to the patient and clinician, it is usually a benign condition that resolves over 3 – 10 days as the air is resorbed into the blood stream for eventual excretion via the lungs.

Sub-cutaneous / surgical emphysema is characterized by soft tissue swelling of sudden onset, usually developing within seconds or minutes. Palpation of the affected tissues reveals crepitus (crackling), an important diagnostic feature. In most cases, this sign is detected immediately however there are reports in which it appears later, making diagnosis difficult.

Discomfort is a variable finding (can happen with sub-cutaneous emphysema when it causes tension in the involved tissues).

Most patients who develop sub-cutaneous emphysema after a dental procedure have only moderate local swelling. However, spread of larger amounts of air into deeper spaces may sometimes cause serious complications. For example, the bases of the lower molars directly communicate with the sub-lingual & sub-mandibular spaces.

These spaces, in turn, communicate with the para-pharyngeal & retro-pharyngeal spaces, where accumulation of air may lead to airway compromise. The retro-pharyngeal space (“danger space”) is the main route of communication from the mouth to the mediastinum. Once air enters the mediastinum, it can also reach the pleural cavity, the pericardium & even the retro-peritoneum. Consecutive cases of pneumo-thorax & pneumo- pericardium may cause cardiac and/ or pulmonary failure. The presence of pain both in the thorax & in the back, would suggest the presence of this type of emphysema & a thorax X ray to confirm the diagnosis is mandatory.

Cases of fatal air embolism & optic nerve damage (by access of air to the orbits) have also been described. Furthermore, dissemination of oral flora micro-organisms along the emphysematous tracts may be responsible for soft tissue infections (eg. deep neck infection and mediastinitis) & sepsis.

Provided that there is no airway compromise, sub-cutaneous / surgical emphysema can be treated conservatively (observation & reassurance of the patient). The prognosis is good. Infection is a potential risk since the introduction of air and not sterile water could cause serious effects to the health of the patient & antibiotics are usually prescribed although this remains controversial.

Emergency intervention could be required in severe cases with evidence of airway compromise & dysphagia.

It is important to advise the patient that they must avoid increasing intra-oral pressure, such as by blowing the nose vigorously or playing musical instruments which could introduce more air.

In the vast majority of cases, emphysema resolves within 2 – 3 days, although residual swelling may be evident for up to 14 days.

In severe cases, immediate medical attention is mandatory. Tracheostomy may become necessary in case of retro-pharyngeal space emphysema with consecutive airway compromise. It has also been reported that administration of 100% oxygen via a non rebreather mask can hasten resolution of the emphysema, because oxygen, which replaces the air, is more readily absorbed. Prophylactic administration of antibiotics, preferentially Co-Amoxiclav, is recommended to prevent secondary infections.

Quintessence Int 1995. Emphysematous Complications in Dentistry 1960 – 1993. An Illustrative Case & Review of the Literature

Arch Dermatol 2005. Soft Tissue Cervicofacial Emphysema After Dental Treatment. Report of 2 Cases With Emphasis on the Differential Diagnosis of Angioedema

J Maxillofac Oral Surg 2017. Air Leak into the Soft Tissues During the Puffed Cheek CT Evaluation of Oral Cavity – Diagnosis and Implication of a Rare Phenomenon